I made the decision to volunteer with animals again. As given away in the title.

I’m always on the look-out for events where I can actually interact with animals, especially in a vegan setting. If there’s one thing I can never understand it’s when animal products are served or consumed in a place where the animals are meant to be enjoying a “safe space” from that very thing. Just over a year ago I volunteered at a place in Spain called Jacob’s Ridge, otherwise known as Pig Village, and as a vegan sanctuary it ticked all the boxed for me. In exchange for a few hours’ volunteering per day, you got a tent, lots of homemade vegan food and the pleasure of interacting with animals with personalities all over the spectrum, and of course falling asleep – and waking – to the sound of pigs snorting and munching just outside. 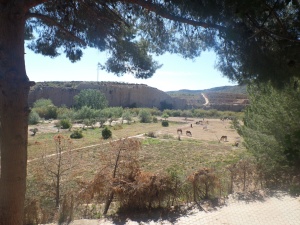 Pictured: the setting of a previous animal-themed adventure

I didn’t write much about it at the time, because I was only just getting the hang of blogging and there were simply too many angles from which to approach it (going through a writer’s block at the time didn’t exactly help either) so one of these days I’ll need to retroactively write a fuller account of my time there. In the meantime I’ll just focus on the present, and most recent experience.

I’m a member of the London Vegan Meetup group, which I joined a year ago when I realised that you were actually allowed to join groups based in places where you don’t go to an awful lot but simply have an interest in what they might be doing and want to decide, at the time, whether or not you’ll be available, or be willing to make the effort to attend. I was both of these things and, based on a quick read of the website (and the fact that I was looking for an excuse to visit London (and Brighton) again anyway) I signed up and booked into the cheapest accommodation possible. This proved to be not too difficult as student accommodation starts freeing up during the summer months so woo hoo!

As per usual, I scouted around for lodgings which made up the magic combo – affordable, central in location, and with free wifi. However because it was central London I was prepared to compromise on things like cleanliness, comfort and noise level. As for getting to London, I was going to fly down, having had a not too great experience getting a very busy train for a very long five hours last time, but because it was so last minute flight prices had been bumped right up, so I looked again on the train website for journeys that wouldn’t be too expensive. It was then that I noticed that some first class seats were going not exactly cheaply but far less extortionately expensive than usual, and it was the option which allowed for individual seating. That was me sold, although it took a bit of going back and forth before finally committing to the entire thing – the day before departure.

So I packed as lightly as possible and away I went, the journey going without a hitch except that the seats weren’t quite as “individual” as they were advertised as being, resulting in me cursing my decision to “treat” myself to a first-class ticket for the very first time. Luckily the accommodation was within walking (huffing with a suitcase) distance of the train station, and the room was indeed very “spartan” – it resembled a prison cell more than a student’s room to be honest but knowing that I could leave at any time (minus the accommodation price) made it easier somehow. 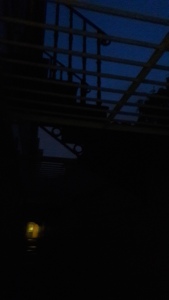 The actual view from my window. Remind you of anything…?

Rising after virtually no sleep (if any) early the next morning, I popped into Regent’s Park and took some photos – and met a squirrel who was not in the least bit shy about approaching me – before meeting fellow volunteers at Charing Cross Station. 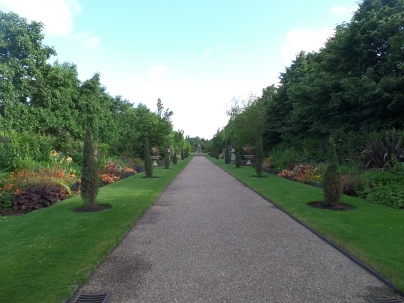 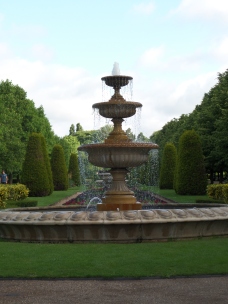 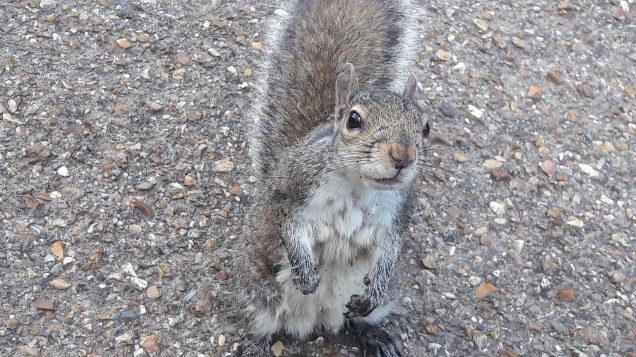 It would emerge that only a third of the fifteen or so people who signed up actually showed up, which was incredibly disappointing (although this wasn’t exactly the first time I experienced this sort of thing) not least of all for the organiser, but we went ahead anyway. We were picked up at the nearest train station by the volunteer who was driving and we arrived at the sanctuary. It was a glorious sunny day for the event to be happening, and the animals – pigs, cows, ducks, chickens, geese and one very friendly goat – were all happily splashing or wallowing around, just as they were meant to be. 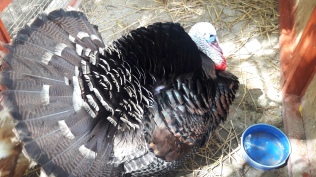 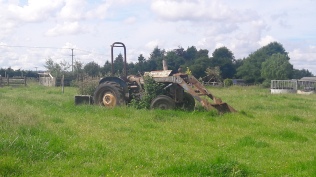 A bit of background info: FRIEND Animal Rescue is an organisation based in the rural Kent area which takes in any abandoned and/or neglected animal they can. These are primarily what most people would consider “farm animals” – who are quite possibly the most systematically abused and unfortunate creatures on the planet – along with a few “companion” animals, and here they are allowed to live out their lives in comfort and peace. Also (what particularly drew me to this place) is that it is a vegan sanctuary, with the humans actively promoting a vegan lifestyle, namely through their open days where visiting humans can observe and interact with the animals (subject to the wishes of the animals of course) and learn more about a responsible and compassionate lifestyle.

Back to the volunteer day; knowing that I don’t do well when put in a situation where I don’t know exactly what I’m supposed to be doing, I decided to simply do exactly what the volunteer I was paired up with was doing, and got to work sweeping out the hen houses, picking up the eggs they had laid (along with the, ahem, accompanying fluids attached to said eggs), refilling water, shovelling manure, and generally meeting and greeting (and getting nibbled and pecked by) the non-human residents along the way.

I learned a few things about some of them; geese and ducks are quite bold and defensive, squawking constantly and trying to peck at you if you get too close; 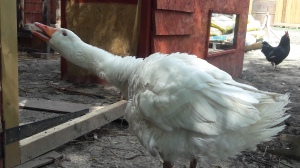 A not-so-silly goose running the show

Chickens don’t mind too much if you stroke them, providing they’re in the right mood; 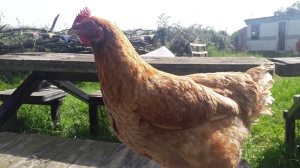 Came up to hang out with me at lunchtime

Goats, or this one goat in particular in any case (who I took it upon myself to name Goaty McGoatface in the absence of knowing their name) can be surprisingly friendly, going as far as to follow you for a stroke or two; 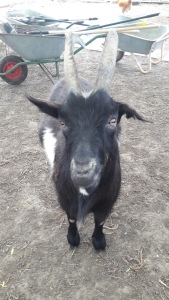 Probably goes by a different name 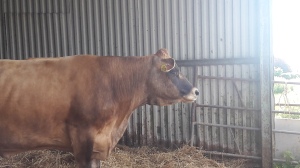 Their moos are quite earth-shattering

And pigs can demolish entire pineapples and watermelons at an alarming rate; 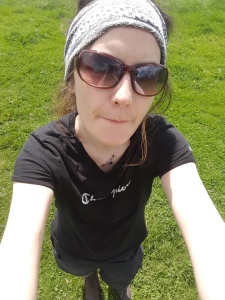 Pictured: not a video of pigs at feeding time as I’d wanted (current website plan won’t let me) so here’s one of me trying to remain awake and upright for an on-the-farm selfie

Of course, these traits – particularly the ones relating to temperament and personality – are not necessarily ones which define the entire species, as that would be a blanket generalisation which contributes, in part, to the speciesism which humans are all too inclined towards. Some of the negative traits, such as the fear, aggression and irritability, are just as likely to have been the result of mistreatment in their past lives as mere quirks of their individuality – with it being a rescue centre, the animals coming to the place will have come from a background which many would not even want to think about, but one which is all too often a reality – and indeed routine – for virtually all of their kind. However as volunteers we came prepared for entire personality “spectrum”, taking care to practice sensitivity and kindness, and being pragmatic about some of them not wanting to get too close.

In any case, the animals were by and large very good sports at having us there, making brief interruptions to their personal space in order to do the maintenance work required for the open day, although I did get pecked and grunted at more than a few times. Such is the price of caring! 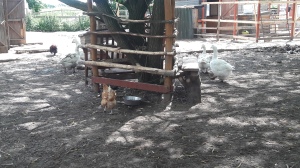 Travelling all that way down, only to have them turn their backs on me 😛

Before even the lunch break (an all-vegan potluck for which I was woefully ill-prepared with cereal bars being my sole contribution) I was absolutely shattered, and genuinely felt unable to continue for much longer. It is rare that I do a full day of concentrated work these days, my energy only tends to only come in the shortest of bursts here and there (if I’m lucky) but knowing it was for a special cause, and being among like-minded people, I pushed on, and I was most glad I did so. As a vegan who strives to do as much good for animals as possible (I still have too many commitment issues to adopt one but I’m working on that), I would love for this to be a more regular thing to do.

As of yet there is no fully vegan animal rescue centre in Scotland to my knowledge – at least one that can be reached without a car. There is one which is still in the process of being funded and is not yet open but I don’t know its exact intended location. Not even FRIEND Animal Rescue could be accessed easily without carpooling, but if there were such a place near where I lived I would be a regular volunteer. Ever since volunteering itself seemingly became a “privilege” which necessitates a rigorous screening process and put on a months-long waiting list – or like me, simply being let go after a session or two for no apparent reason – I’ve found my drive to continue to make a come-back into volunteering wane considerably. One might think that simply a willingness to help would be the only necessary prerequisite (along with a basic background check if working with vulnerable beings) but when I find that I spend most of my time at home not really doing anything of much use to the wider world when I KNOW I want to be more productive, and to participate more in society, one can’t help but conclude that there has to be a reason.

The great thing about places like FRIEND Animal Rescue is that they welcome any and all volunteers with open arms, perhaps in part because compassion and consideration for animals (outside of those relegated to pet-status) is still so rare, despite growing awareness with the help of vegan activists, that all the help anyone can offer is the very least that people can offer these animals who have endured such a hard life.

I’d strongly urge anyone to go visit their nearest animal sanctuary or rescue centre – actually go to meet these animals face to face, and then never allow themselves to forget the faces that will imprint themselves on their mind’s eye. The faces behind the “machine” which only views them as products and property, doing all it can to hide the fact that they, in the truest sense, are people too.