When it comes to blogging I am perhaps not the most timely. When not posting immediately after the relevant thing has happened it tends to get… lost in the shuffle, the memory fading the more time goes on.

Having made the mistake of falling into that way of thinking when coming back from Copenhagen, I postponed and procrastinated (which I have a real talent for now) and now I have little memory with which to write an account of this mini-adventure.

Nothing except for my photos, which I will have to use to revive my memory.

My recent revival of my love of photography will perhaps most notably pay off in this post, as I delve back into my digital collection in order to retrieve fragments of a randomly booked jaunt which took place nearly two months ago amidst a rather peculiar time, in which I spent most of the time outside of the trip firmly at home, mainly doing freelance work – which isn’t great at getting you outside. In fact it’s very good, if you’re not very careful, at making you rather too comfortable with being in all day every day. Which is fine for a certain period of time, but then you start to forget what “outside” is actually like.

So I will do that delving now, and try to use random photos not just for the reader’s perception of my time in Copenhagen, but indeed for my own…

Touchdown. After a (relatively) painless flight, coped with all the better by listening to The Smiths and the Dresden Dolls on an endless loop, I descended upon København, shattered from having to leave home at stupid o’clock in the morning. The first thing I would do would be to lie down. But first to take an establishing photo: 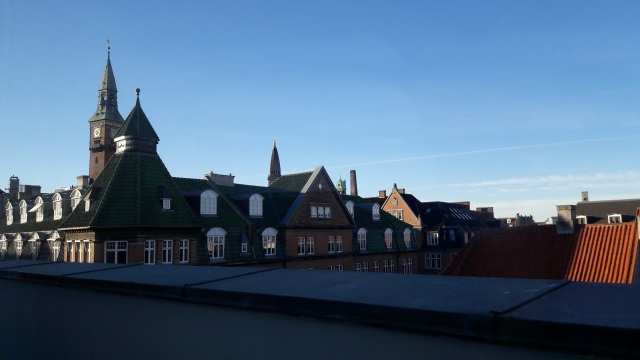 This was the view from my hostel in the “heart of Copenhagen”, and this was as good as the weather was going to be the entire time I was there. After the nap I had to do something as my “first act in a new place” and so I went a’wandering.

Since it was late November/early December, it was prime Christmas Season, the perfect time to see the festive markets in full swing. I remember, looking through the photos, the brightly lit night streets, the quintessential European Christmas market set up and taking pride of place in an actual European city (with which I found it safe to conclude that Christmas markets, like Peruvian flute bands, are basically a universal thing), the quaint but freezing pedestrian streets which probably weren’t any more quaint-appearing than some streets back home but in a new place they’re “just so cute!”, and a general air of calm festivity. Then I went back to the hostel and its very friendly and welcoming bar area, and had a drinkie to christen the place.

The primary shot for this day – the bird fountain – brought this day right back to me. Today was the day that I took advantage of not one but two of the acclaimed walking tours of Copenhagen, the first being a “general” tour of the city, and the second being an “alternative” tour of the hippie neighbourhood of the Freetown of Christiania. Having been informed at the beginning of the first tour that this part of the city was once ruled by a party-crazy monarch who commissioned an awful lot of the ornate buildings we saw along the way, we wandered along, amongst many places, the University of Copenhagen campus, the Rundetårn (Round Tower), the local foodie market (also looking very Christmassy this time of year), then on to see more classic buildings, which the tour guide told us were influenced more by other European countries than by homespun Danish design, then over the bridge to Christiantown. This is where we saw the church tower which we were told had a staircase which wound the wrong way (and has been roundly (no pun intended) mocked for it ever since), a canal system which looked remarkably like that of Amsterdam, and finally the lawless (within reason) borough of Christiania – just in time for sundown. 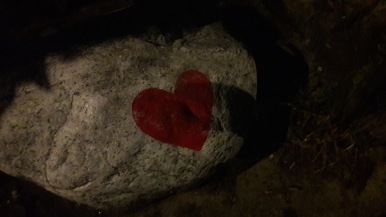 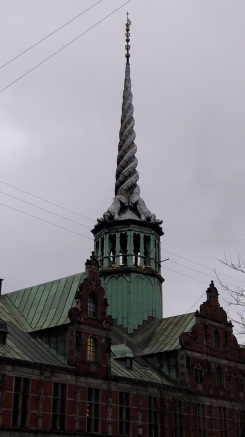 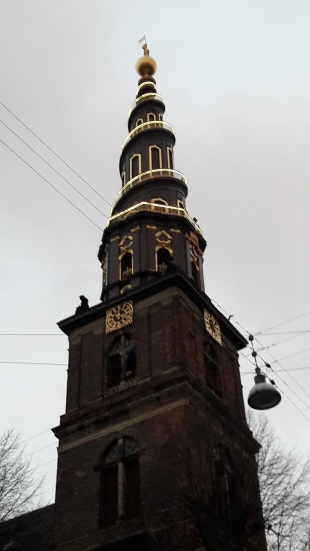 Here would have been a great place to put all the photos of this quirky independent neighbourhood but we were warned, in no uncertain terms, that blatantly taking photos of the place is “frowned upon”, and sometimes even met with hostility, so a quick walk through of the place – a strong “herbal” scent pervading the area – had to suffice. One photo on the very outskirts of the place was all I could manage before making my way back home. Rarely have I been more glad of the existence of Google maps than I was then.

Today was more of a “see the place for yourself” day. Mainly because I didn’t even want to attempt to navigate the public transport system (and because I didn’t want to risk embarrassing myself by trying to find out a bus fare in another language), I pinpointed some points of interest on the paper map I was given and set out to see some sights. The first was the Amalienborg Palace, the residence of the Danish monarchy. I could’ve had a tour or two of the grand interior but I wasn’t so much interested in royalty, in the brief time I had there, than in just “experiencing” the place. So after a few photos I moved on to Nyhavn, the very touristy neighbourhood which is, basically, the Times Square of Copenhagen in terms of how heavily photographed the place is, but it was still a place to be seen. Also, being so close to the shore, a venture to the very edge of the Baltic was in order. As were terrible jokes about it being Baltic that day… On to the triangular island which served as a military base but now has nothing appearing much more threatening than a windmill, followed by the inevitable selfie by the Little Mermaid statue. Sorry but it had to be done, otherwise how would you ever be able to tell which city I was in? 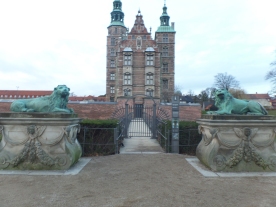 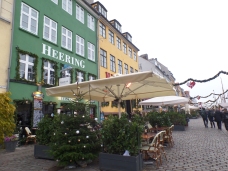 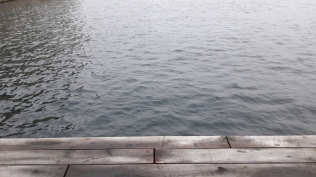 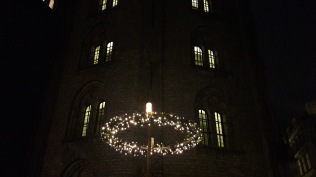 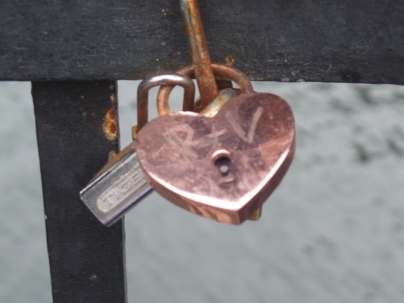 Going via some green spaces, and some rather funny looking statues, I went to my first exclusively vegan restaurant in Copenhagen – and it would be my last, considering how expensive it would end up being. I would just have to live mostly on rice cakes and Co-op salads eaten directly from my suitcase from then on. Finally, as it got dark, it was time to take to the Rundetårn – but sadly, not to appreciate the awesome celestial view from the world-famous observatory, because it was overcast – on the one day the place was open when I was there. Still, that didn’t stop me narrating on video my progress up the smooth, ramp-like path up the tower (the famous cycling competitions held there appealed to a certain cycling fanatic friend of mine), enjoying the view of the city, if not the sky, from the top, and then checking out the interesting but somewhat depressing museum exhibit on the way back down. I’d say the day ended there but then, in a final bid to “socialise” at the hostel, I ended up getting rather drunk and playing a card game with some friendly strangers, whom I’m confident I will never see again in my life. Unless they pleasantly surprise me somewhere else.

Aka, “going to another country for a few hours day” – this was the day when I endured a mild-to-moderate hangover on the Oresundstag, which is the name for the train which goes from Copenhagen to Malmö in Sweden. Like, a whole other country.

But first, I had to visit the library, because it’s the law. My personal law. Known as the Black Diamond (which it would be frankly churlish to say doesn’t look like a certain “Trolltrace” building), it is the royal library of Copenhagen with vast archives, including a copy of every single Danish book ever published. Unfortunately, as I wasn’t a formal scholar, researcher, student, or otherwise have an official reason to be there, pretty much all of these archives were off-limits, but I managed to appreciate the “Danish cartoon” section, which gained notoriety about a decade ago… a swift snoop around the building would’ve had to suffice, before running for the train to Malmö. 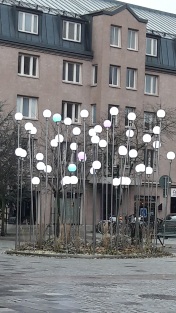 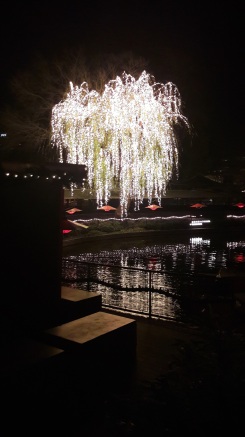 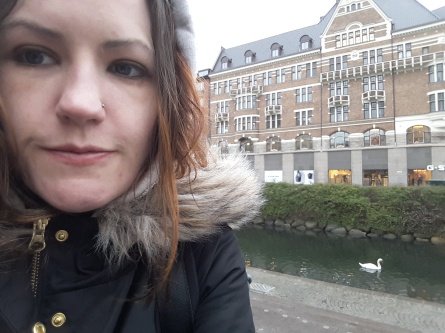 After a novel but decidedly undramatic transition from Denmark to Sweden, I simply had a wander around the area, because honestly that’s all I really wanted to do. There are no major tourist landmarks in Malmö, and it’s not the most “exciting” city in the world. But the vibe I got from the place was that it was very pleasant and livable, it’s just the sort of place I really wouldn’t mind spending some time in for work or study, and I’m sure the heavily overcast weather didn’t do it any favours while I was there. I’d imagine that it can be pretty glorious in the summertime. So I did my thing: I took some photos, went to a vegan Chinese buffet restaurant to alleviate my “delicate condition”, feeling all the more delicate for being the only sadsack who was on my own in the whole place, took a selfie with a swan, did some more wandering, and then… pretty much just took the train back to Copenhagen. Later that evening, with time for one more “main”  thing, I went to the famous Tivoli pleasure gardens, which was set up like a Christmas wonderland at the time. It was basically a wintery Disneyland. Having stretched my courage to capacity simply by going to Copenhagen in the first place, I wasn’t entirely game for going on one of the scary rides all on my own, but just having a walk through the glittery scene was something.

Today was “check out and go home” day, and seeing as it was more hassle than it was worth trying to store my suitcase in the basement of the hostel (which involved actually having to manually haul it down the stairs and then try to find a free locker (I couldn’t find one), I ended up hauling my suitcase during one last seeing-of-sights. The only place I really went to was the local botanical gardens, as seen here: 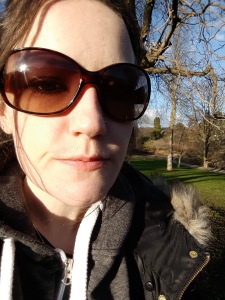 … then it was farvel til København. In typical Danish ironic style (actually I’m not even sure the Danish are renowned for irony, let alone a specific brand of it, it just sounds funny), the last clear night happened to be on the night I was leaving. But this could potentially work to my advantage, as it would offer a full uninterrupted view of the Oresund Bridge, one of the longest bridges in the world, in all its lit-up glittery glory from the sky. But this was the best I could do. My establishing “end shot” to the whole tale.