It takes me a ridiculously long time to post here, and I’m becoming more aware that it takes me a ridiculously long time to do absolutely anything now. For a long time I had no idea why this would be the case, considering that blogging is meant to be “what I do”, but then again if you don’t have anything to blog about then it becomes harder to blog about just… nothing. Well some might be able to manage it but I only ever want to blog if I feel like I have something worth saying.

After returning back home from Israel I relapsed, with a startling ease, into my default “do nothing but worry about everything” lifestyle, which usually involves… doing nothing. At least on the surface. However I had it in the back of my mind, the entire time, to try to keep up the momentum that I had built up over my most recent excursion, before I became too stuck in my “routine” (more on that on a post soon to come), and it occurred to me that I had not yet used a tent I’d had for ages and was going spare.

Also, I wanted – or rather needed – to get back to nature.

A few weeks ago I went camping in Arran alone for the first time. That is to say, I went to Arran alone for the first time and I went camping alone for the first time. Despite making an effort to travel more – which more often than not means going it alone – these two things I had never once done alone before then, so it was another experience to try, in order to see if I wanted to repeat it in the future. Having initially been thwarted by a ferry already departing when I was about to board (because apparently you cannot arrive less than fifteen minutes before departure) I summoned up my motivation, with some effort, to try again and three days later I finally made it to the ferry – and to Arran – this time. 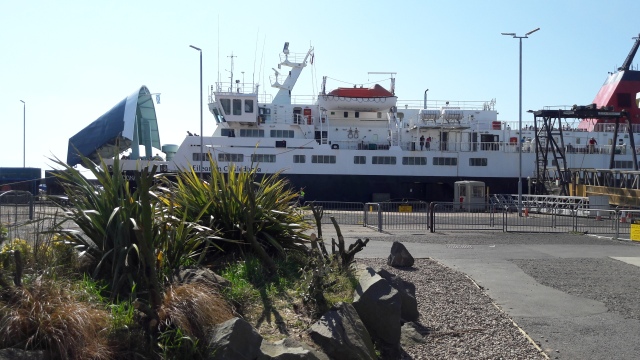 The ferry which wouldn’t let me on. I got on one a few days later.

Opting for the same campsite I stayed at the last time, due to it being conveniently located for someone who doesn’t drive, I was sure that it would be a relatively painless first-solo-camping experience. Above all, I was there to go walking, take photos, and generally reconnect with all the things I tend to miss out on when holed up in my home much of the time. It made sense to do this in a place which already held good memories for me.

Setting up pitch was a doddle, with my tent being one of those pop-open ones (flimsy as hell but far more novice-friendly), and I immediately got to appreciate one of the known highlights of staying at that particular campsite: the resident deer community.

There is something quite special about getting so close to a typically reclusive species, but of course their appearance at the precise moment I arrived, in the mid-evening, indicated that it was already getting late. Not necessarily too late for a quick hike, given the lengthening of the days, but on account of the relatively infrequent bus service, too late for me to do anything except wander to the nearest pub to charge my devices (electrical outlets were only available for tent-residing guests during the day for some reason) and planning the route for the “main” hike the next day. Then it was during the walk back along the virtually deserted road both to the pub, and then back to the campsite, that I was able to take full advantage of my camera and get some of my best yet shots of the twilight and of the moon; (note the words “best yet”, still plenty of room to improve…) 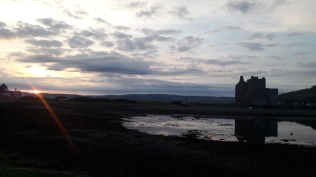 That night, however, would be one of the coldest I’ve known, not on account of the weather itself which was relatively mild, but due to the specific location of the campsite – which acts as the opposite of a suntrap in the evening – and the aforementioned flimsiness of the tent. I suppose it was one of those experiences which they call “character-building” but in any case eventually it became daylight, first marked by the snuffling and munching of the deer just a few inches away outside. I actually feared, one more than one occasion, that they would try and trample onto me, confused by the colour of my tent blending in so well, but I did sign up for interacting with nature so…

It was the original plan to do at least one “proper” hike, from the choice of downloadable routes on my hiking app, but of course to do anything of the kind I would need the phone it was downloaded onto to have sufficient power (I came of age just when technology started to overtake the traditional paper map, and I never learned orienteering) so it was that the entire morning was spent merely charging my phone at the local distillery cafe. This would definitively narrow down the number of routes I could do to definitely one, and *maybe* two at a big stretch. I chose the one which I could access from where I was already, a route which took you from Lochranza round the tip of the north of the island, towards the Cock of Arran (yes that’s really its name) which would make for some impressive scenery along the way. 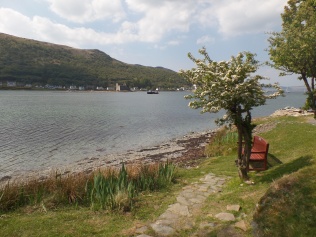 The app leading me up along the bay of Lochranza, many photos were taken and many sheep were seen, albeit not too pleased to be approached too readily, only being willing to give a wary stare.

They know how to stare you down…

The northern coastline, at least alone the prescribed route, was quite low and right by the shore, and would lead to a beauty spot called Fairy Dell, where there was meant to be a cottage, then a climb up into the wooded area. Along the shore was where I noticed the features of the landscape seemingly unique to the area; the types of moss, flowers and rocks textured by the sea. It would turn out that I would only make it as far as the cottage, because my phone still managed to run out of power and I wasn’t quite confident enough to go climbing up somewhere I didn’t know with no other means of navigating. 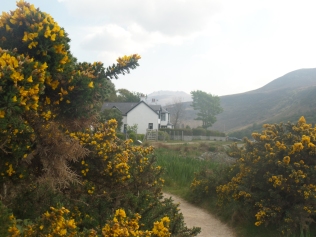 Also, due to the lateness of my starting, it was starting to become more… populated. Which wasn’t exactly what I’d come here to seek out, judging from the expression I now reserve for just such an occurrence.

I’d come seeking total seclusion, but I suppose that if your plans are prone to being overthrown all too easily – say by being unable to gain a full phone charge until later in the day – then these things tend to happen. So doing my best to proceed as planned, it was in this picturesque little area I indulged my camera some more, and tried to figure out just what this Fairy Dell cottage was supposed to be, apart from a landmark on a walking route. 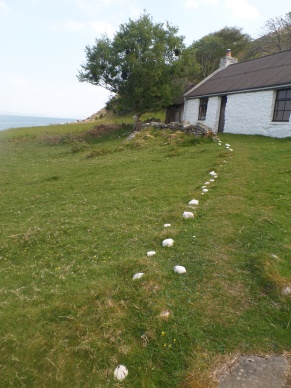 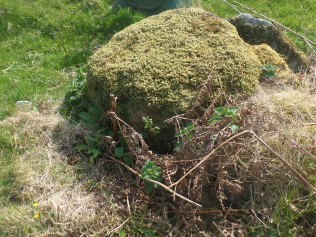 For one thing, there were two cottages: one white and one brown, although from the guide the white one was what they called Fairy Dell cottage. The brown one looked more like a regular hermit’s cottage by the sea. They each looked like a normal residence from the outside, albeit one from a traditional fairytale. According to local folklore, this is the area where fairies come to dance – and presumably, the cottage is where they go to put their feet up and have a drink when they’re tired of dancing (and of constant passers-by interfering with their dance) but when peering inside, the cottages seemed to serve as nothing more than storage space. So much for the magical illusion. But it was nice to pretend that it might still sometimes serve as an idyllic home for some kind of creature, human or otherwise…

Making the pragmatic realisation that, due to transport schedules, this would most likely be my “main” hike of the day, I doubled back on the route back to the campsite, meeting some more sheep along the way who were enjoying the local delicacy, the gorse:

Then it was time to think about sustenance, and also getting some kind of extra layer of material with which to survive the second night camping. Hitching a ride into Brodick (the main town on Arran) I stocked up on vegan supplies at the local store and, realising that I wouldn’t want to sit alone in a pub anyway, even if they did have something I could consume besides alcohol, I hitched a ride right back to the campsite, “squirrelling” my supplies in my tent (as I was once frequently accused of doing, by, as it happens, who I stayed at the campsite with the last time) and squeezing in one last hike. The sunset from this part of the island is a wonder to observe, especially in the summertime, and from this vantage point it would’ve been a crime not to at least try to immortalise it on camera.

The second night, rather than turning into a human popsicle, it was only the weight of my body which stopped the tent from flying off to another remote point in the western isles, and a middle-of-the-night trip to the loo was consumed with worry that the tent would not be there upon my return. Fortunately it was, and having been subjected to both low temperatures and high winds, unexpectedly, during my stay, I “treated” myself to a prompt departure back home.

However ill prepared I tend to be for these types of endeavour, I’m almost always glad afterwards that I at least made the effort to try. If nothing else it produces an amusing anecdote or two, and some images to add to my portfolio. As I’m in the (slow) process of developing a sideline in photography – with a view to becoming more of a “full-time” thing – I try to maximise the situations I wind up in which allow me to take advantage of the ability to practice. Although I’m not sure if I’ll camp again anytime soon though – it turns out that being able to drive is something of an underrated skill, so ubiquitous as it is now, and one that which becomes starkly apparently by its absence. Therefore when I choose a place to set up camp – literally and metaphorically – it has to be both within relatively easy reach of vegan food and have decent wifi.

These are things which I’m perhaps able to survive without for a time – but under my particular circumstances, not to thrive.